Windows Live Writer 2012: Continuing To Use An App That Microsoft Has Forgotten

Having to come to the realization that Windows Live Writer may actually be a dead product to Microsoft, you have to start thinking about what application you're going to move to next.  Such a concept is fairly depressing because Windows Live Writer has been such a well received application in the blogging community.  It makes the overall blogging process so much easier,  if for nothing more than being able to drag-and-drop images into the blog posts and to be able to see generally, what the blog post is going to look like before it's actually published.

My last attempt to use Zoundry Raven was unsuccessful. I wasn't able to complete the process of actually opening the application. Which indicates to me that the application has completely stopped working in the prospect of using it with WordPress; which is truly unfortunate. 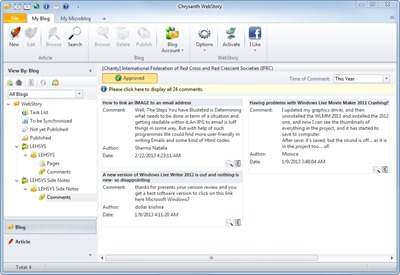 The application initially loads fast enough, but I found problems with trying to synchronize the account with the most current posts, trying to create new posts and trying to edit existing posts.

Currently, I'm in the process of using several different applications for composition and then I take that information and copy and paste it into Windows Live Writer for the final presentation before it's actually posted to the websites.

It's unfortunate, but I just don't find that the web interfaces for blogging to be that comfortable. Composition pages for WordPress, blogger or using services like ScrybeFire just don't offer the comfort level of composition as Windows Live Writer does/did…

Are you running into this issue? Have you found anything to replace Windows Live Writer? Let me know…