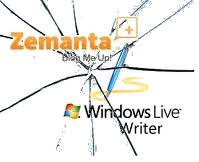 Right on the heels of my post for Zemanta pushing another version of their plug-in out almost 8 months after I let them know about a bug that crashes Windows Live Writer 2011 after you get to 470+ words; it's got the same darn bug, just in a new spot.

I was ccompletely wrecked by this. I love the Zemanta plug-in, but in it's current form it's darn near impossible to use without infuriating yourself.

I've already contacted Zemanta and advised them that their bug is still there, and I've already provided instructions on how to re-create the problem.

But also a couple months ago they were having some problems with demand this plug-in crashing Windows Live Writer; something that I pointed out to them several times and also by providing a video of how the plug-in was crashing the application.

Read more »
Posted by Unknown on Wednesday, May 18, 2011 No comments: Links to this post

Email ThisBlogThis!Share to TwitterShare to FacebookShare to Pinterest
Categories How to, Plug-ins, Windows Live Writer

Do you use Dragon NaturallySpeaking 11 and Windows Live Writer 2011?

Well, you might have noticed a small problem with the dication in to Windows Live Writer. Is it constantly backing up 9 characters, or overwriting like every where you don't want it to as you're putting efforts in to dicating an article? Well, I was too..

…and there's a solution.

Read more »
Posted by Unknown on Wednesday, May 18, 2011 No comments: Links to this post